Yandex.Maps and Yandex Map Editor are built based on satellite images of Earth.

This section describes the most important characteristics of satellite images and geographic features for drawing purposes. 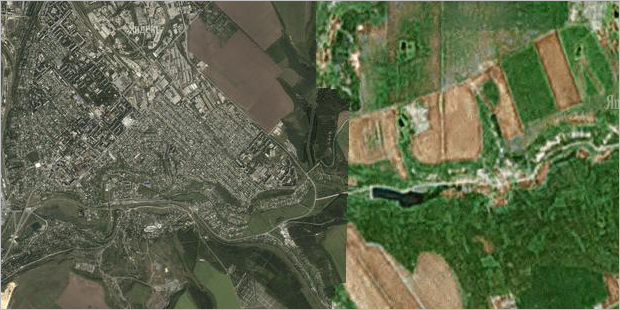 You should only plot items whose shape can be determined by the satellite image available. Rivers, main roads, and localities can be drawn even if the image is not very detailed. If you want to draw small items (small roads, including pedestrian lanes, individual buildings, etc.), it's better to wait until a detailed satellite image is available.

Sometimes there is a discrepancy between the new and old satellite image, so map items don't line up with the new one (as in the image on the left).

In these situations, you shouldn't edit the map by shifting items individually to new positions. This type of map section will be edited by Yandex employees and the items will be shifted to their appropriate locations (see the image to the right):

Satellite images become outdated over time: an empty lot might appear where a newly built-up territory is, a demolished building might display where a new one has been built, etc.

For example, in the image on the left there is a garage complex and an empty lot marked with green arrows, and in the right photo taken a few years later, you can see buildings in those same places:

If you're in a situation where items that you drew or edited don't match satellite images, (for example, if the image is like the one on the left that is already seriously outdated), you must include a comment explaining why your work does not match the satellite images.

If the satellite image was taken when the weather was overcast, a good portion of the territory that the image covers may be hidden behind clouds. On these sections of the image, it may not be possible to distinguish even major map items (such as in the image to the left; the image on the right is of the same area in clear weather):

If territories that you want to map are covered with clouds in the available images, you can draw the item you're interested in schematically by relying on images of the surrounding areas. Then, when a detailed image is available of the area you drew, you can correct your previous work. However, it's better to refrain from drawing small map items that are completely hidden by clouds.

Snow may mask some items to the point where they can't be detected (see the pair of images on the bottom):

If the territory that you want to map is covered by snow in the available images, you can still map them if you account for the ways that snow changes a landscape.

When drawing the edges of a building, it's important to remember that satellite images are typically taken at an angle to the ground (rather than from directly over the item). This is why the roof outline will not match the footprint (i.e. the outline of the building's foundation) in images. Make sure you are drawing the footprint. The higher the building, the greater this discrepancy.

In the image on the right, the clearly visible roof outline is represented by an orange rectangle, and the visible footprint fragment is outlined with an orange dotted line. It's clear that the shifted roof outline covers the driveway going into the courtyard (the blue dotted line):

To make sure that buildings with sections of varying heights display properly on the map, give each section gets its own footprint.

You can tell that a building has sections of varying heights based on the shadows on the satellite image (and by the walls, if they are visible). But it's not always possible to enter the height of a building based on a satellite image. If available, panoramas can help you figure out how complicated buildings are constructed so you can draw them accurately. Here is an example of how to draw this type of building (not all parts of the building are drawn on the map to the right):

In rural areas, buildings tend to be low-rise and there is less of a problem with outlines being displaced. Rural areas present their own challenges though, as building contours are often small and less detailed on satellite images.

That's why it's important to handle each situation individually, or else one might not distinguish a home, which should be drawn on the map (see the green arrows) from a free-standing garage, which should not be included (see the red arrow):

Depending on the level of illumination on Earth's surface at the moment the image was captured, as well as how detailed the image is and what type of surface is covering motorways and railways, lines on the image may appear in different colors or shadings:

Roads are generally straighter than rivers. But if a motorway runs alongside a riverbed, then its contour may not differ from that of the river. Sometimes drawings that look like meanders (bends) in a river actually represent roads in mountainous districts:

In difficult situations like these, you can distinguish roads from other linear items such as rivers based on if they are linked to a road network (rather than a hydrographic network).

For example, the green arrow in the image below is pointing to an item that could be either a road or a river (it's not possible to distinguish based on the image): 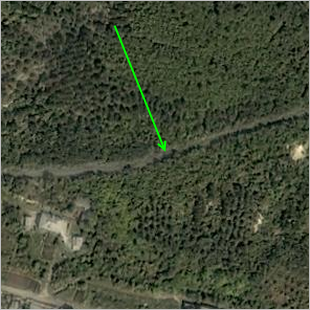 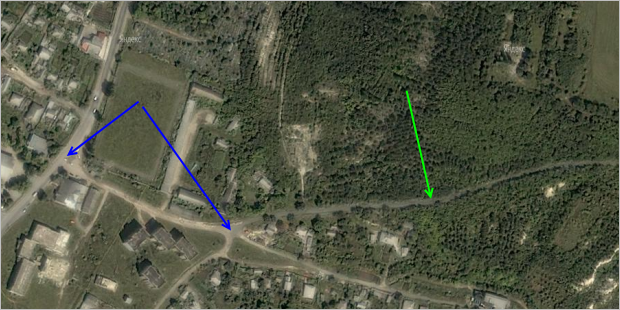 A road's significance on Yandex Map Editor depends on the role it plays in the road network. This role is not only determined by features of the road itself (its surface type, number of lanes, etc.), but also the types of localities or parts of localities that the road joins.

A narrow road with one driving lane may be more significant than a road with two lanes if the former connects several localities, whereas the latter only connects neighboring parts of the same city.

Railways can be distinguished on satellite images based on their inclusion in the railway system, the relative straightness of their lines (with no sharp turns), the appearance of railroad cars and overhead contact-line poles, and certain features of bridges (they tend to have a particular construction): 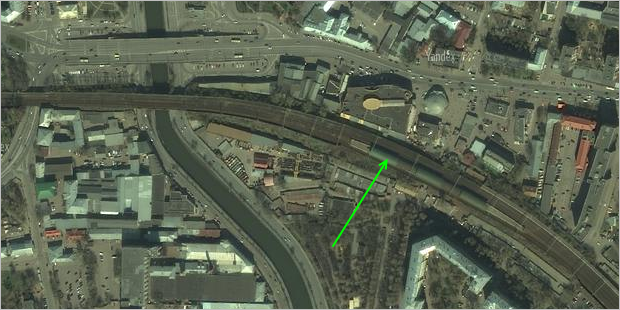 Bridges can be easily distinguished from other map items on satellite images. They are located at the intersections of linear map items (motorways and railways, rivers and channels) and are clearly outlined on detailed images:

As with buildings, when you draw bridges you must keep in mind that satellite images are taken at an angle to the ground (rather than from directly above the map item), so there may be a discrepancy between how the surface of a bridge above ground level looks in the image and the actual outline you want to draw. Furthermore, the higher the bridge, the greater this discrepancy.

In the drawing below, the clearly visible outline of the bridge floor (part of which is highlighted using an orange dotted line) is noticeably dislocated in relation to the representation of the bridge at ground level (depicted with a solid orange line). The green arrows show the size of this discrepancy:

When mapping bridges, make sure to account for this discrepancy. Otherwise a road that runs over a dislocated bridge may be drawn where a different motorway should be, which ruins the drawing of that road network.

In these situations, it's best to draw the road by focusing on the locations of the bridge pillars: 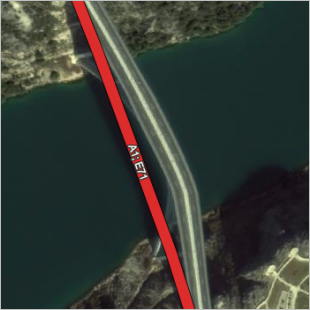 Sometimes bridge pillars located in a valley significantly below road level are displaced from the road in the satellite image (see the red arrows). In these cases, it's best not to draw the road based on the pillars, but rather based on the road: 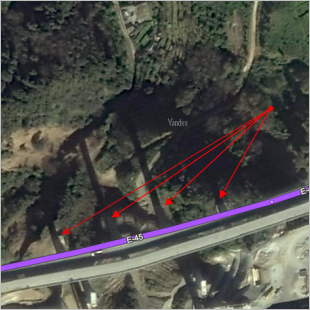 Bridges that intersect a valley may remain on the same plane as other sections of that same road (i.e. not rising above road level). In these cases, you may not need to shift the road line in relation to the bridge floor. 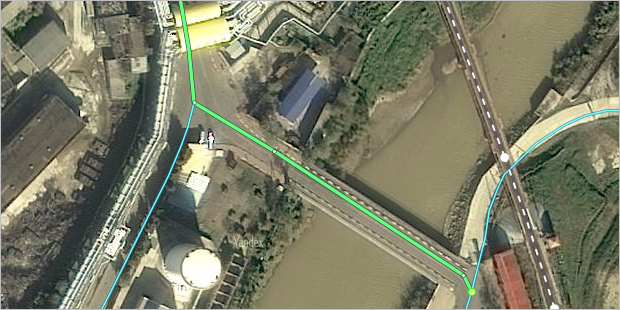 Depending on the level of illumination on Earth's surface at the moment the image was captured, rivers and channels may be colored or shaded differently:

You may only be able to determine that you are looking at a river unless you see that it is part of a larger hydrographic network. Track what map items the line connects to. If it's connected to a body of water or another river, then it's probably a river: 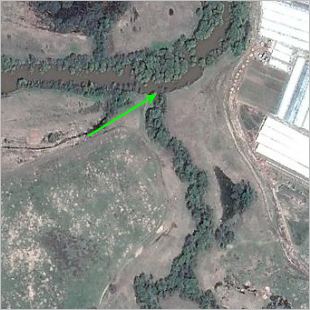 The same applies to channels. Channels are usually straight lines; usually you can distinguish them from roads if you follow where the line came from and where it's going. If it's connected to a body of water, then it's probably a channel: 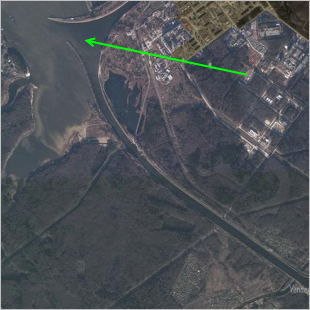 An important characteristic of rivers is meanders (river bends).

It's harder to see meanders in mountain rivers since they usually flow into narrow valleys. But on plains, meanders help rivers stand out on satellite images even when reflection from the water is not visible due to overhead trees: 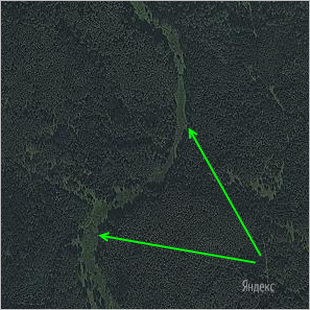 Meanders that separate off from the riverbed often form oxbow lakes (which are distinguished by their arched outlines). If you see oxbow lakes, this is a clear sign that a river is near. 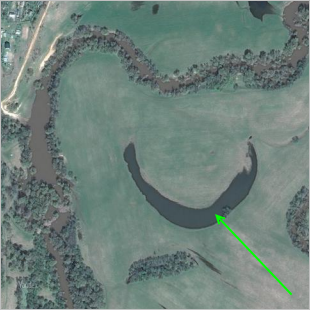 When looking at an image, keep in mind that channels sometimes intersect with rivers at aqueducts. In these cases it is easy to confuse channels with motorways that intersect rivers at bridges (the image here shows a channel): 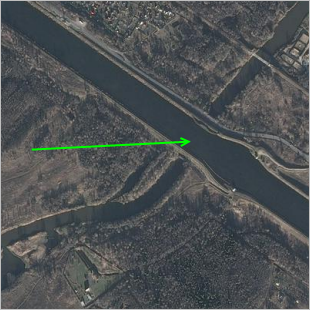 Was the article useful?
Please specify why
Thank you for your feedback!
Please tell us what you didn't like about this article:
Previous
2.2.7. Keyboard shortcuts
Next
2.3.2. Map Editor Notepad
You can also go to