The attribute panel for a section of a tram line looks like this: 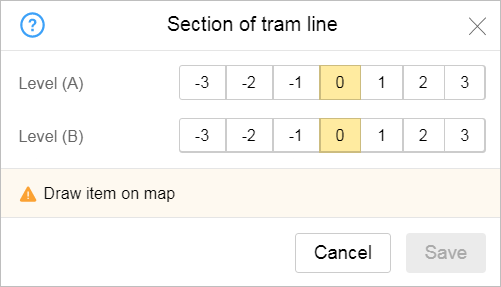 Use Level A and Level B attributes so that intersections of tram lines with other transport lines display properly when they are located on different levels (such as if one is on ground level and the other runs through a tunnel).

Enter values for the road level in the Level A and Level B fields — for the beginning (A) and ending (B) points of a line section.

3.14.2.1. The rules of attribution of public transport stops

The attribute panel for a ground transport stop looks like this: 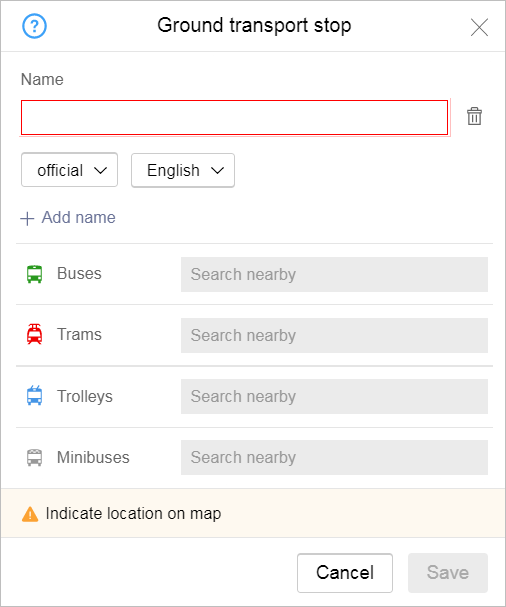 When you add attributes to a ground transport stop, follow the rules that apply specifically to them. The attributes for items are listed below, as well as the rules for entering values for each of them:

Names of public transport stops are set according to the rules given in the section 1.3.1. Object name: General rules and n 3.1.4.2.2 .

For public transport stops, use the name types Official, For caption on map and Also known as, historical (don't use other types of names).

Make sure to use uppercase in transport stop names.

Do not use quotation marks in transport stop names.

Sometimes, a route passes through a locality with two stops: one inside that locality and the other on the main road as it's making a turn for said locality. If both stops share the name of the locality, they should be labeled as follows: the first stop should retain its namesake, while the second stop should say “Turn for...” before the locality's name.

Here's how this should look for a village named Kamenka:
If there is only one stop and it is located near the turn, it should be named in one of the following ways:
3.14.2.2.1.1.2
If a locality has several stops named after it with different numbers:
3.14.2.2.1.1.3
If a stop is named after a locality, do not specify the locality type. The exceptions are:
3.14.2.2.1.1.4
If several stops share the same name in official documentation whilst also being on the same route (On demand, Gardens, etc.), you can make their names more specific (e.g. Kamenka Gardens) or you can assign names
to unnamed stops On demand.
3.14.2.2.1.1.5

If you need to clarify a stop name (the name of the locality the stop is located in or another non-numerical clarification), use hyphens (we recommend dashes) and spaces in your clarification. For example: Smolevichi — Zarechnoye stop, Moskovskaya St. — End of line You can only use the “End of line” marker for a last stop when it shares a name with the stop before that. For example, Moskovskaya Street. “S.” — a stop.

If a stop has no official name, you can use the name of the nearest street, a place where passengers congregate (such as a store), or any other notable landmark as a substitute.

If the official name of a stop and the name used on route signage differ, then give priority to the more commonly used name. Furthermore, all remaining station names can be added in the “also known as, historical” field.

If several signs with different names are posted at a stop, then write these names in the official name field separated by a slash (/).

If the stop has been officially renamed, but the sign has not been updated, then enter the new name for the official name.

3.14.2.2.1.1.7
In the official name for the item type, enter the transport stop name without abbreviating and in the same format that is used locally or in itineraries. Furthermore, the word order in names is determined based on what sounds best in relation to the proper name (see points 4.1.3.4.1.3 and 4.1.2.2.2.3).

If the name of a numbered item refers to an organization and is only one word long (and is not a compound word like “Caltech”), then the word order should be as follows: [type No. number].

You can only use the phrase “On demand” as the proper name of the stop. In this case, you do not need to fill in the other name types. If a stop has a proper name, then do not add the “On demand” phrase to it.

You do not need to add explanatory annotations to stop names (to indicate that the stop is the last one on the route or that passengers can only get on/off there).

The “No.” is specified in the name of a stop if it's used together with the ordinal number in the area itself.

The "caption on map" name is only specified if it differs from the official name. For example, if there are words that should be abbreviated in accordance with the general naming rules (see Section 3.1.3.1. Name types: general rules). Caption names should match the name used on route signage as closely as possible.

You can use certain abbreviations in the name if they are used on route signage. For example: Dispatching station → DC.

Such names are not edited by users.

For “Also known as, historical” names, the official transport stop code can be used if it is used in passenger services (such as SMS services informing about upcoming transport). In this case, the transport stop code will usually appear on the route signage for that stop. You can also enter different variations on the proper name if they are listed in the official name field separated by slashes (“/”).

In the “Routes” fields, enter the route number for each type of transport that uses that stop.

Enter route numbers one at a time. They are selected from a list that automatically includes numbers of routes for every type of transport vehicle that pass through the area within two kilometers of that stop: 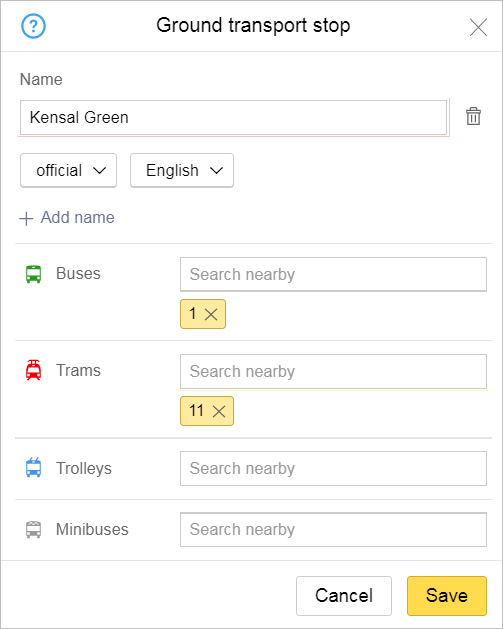 If the route number you need is not in the list, enter it in the line (this creates a new route). For map item names, write building names that are part of route numbers exactly as they are written on route signs.

The values that are entered appear in the orange stripe.

To delete a route number from a given transport stop that it no longer services, click the cross in the appropriate stripe.

The attribute panel for a bus station looks like this: 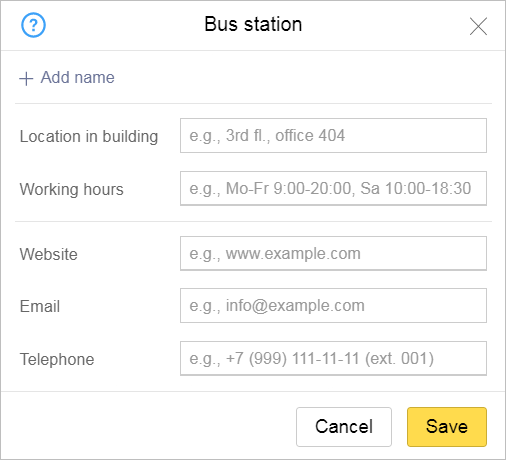 When you add attributes to bus stations, follow the rules that apply specifically to them. The attributes for items are listed below, as well as the rules for entering values for each of them:

Location in building: do not duplicate the address of the building (see Section 3.5.2. Rules for address attributes). Indicate the location of the organization in the building.

You must enter the bus station's email address in the “Email address” field.

To edit route parameters, click on the stripe containing the route number in the attribute panel for that ground transport stop.

An attribute panel for the motor transport route opens (or a similar panel for adding attributes to tram routes):

The map should have scheduled routes for all kinds of urban, suburban, and intercity land transportation, such as buses, trams, trolleybuses, and minibuses.

Urban, suburban and intercity routes come first. After most of them are complete, you can then draw the interregional and interstate routes they comprise.

You can map the following:

Do not map the following:

After you enter the route attributes, you should link them to the transport stops where the vehicle stops (going in order in both directions). Be sure to include stations where passengers only embark or only disembark.

Equipped stops in rural areas are included in all suburban and inter-city routes that pass through them (except for cases when the vehicle does not stop there).

Do not include stations where the vehicle passes by but does not stop.

To include or exclude a stop from a route:

When naming public transport routes, only use the “Official” and “Also known as, historical” name types. Don't use other types of names.

Don't enter old route numbers or names of carriers in the route attributes.

You can only identify the route using formats like “First stop — Last stop” or “First locality — Last locality” if a route doesn't have an official number. The larger and more significant locality should be specified first. For example, Moscow — Natalino.

When naming unlabeled routes that lead to shopping centers, specify the name of the shopping center first. For example, AUCHAN — Bratislavskaya metro station.

then you can specify such stops when naming the route. For example, Moscow (Krasnogvardeyskaya metro station) — Ryazan.

Don't include the following in the official name:

You can identify the itinerary using the format “First stop — Last stop” or “First locality — Last locality” along with the number for the “Also known as, historical” field.

You can also enter important intermediary points on the route if it would not be clear what the exact route was otherwise.

For example, for bus #501 connecting Moscow and Lyubertsy, you can enter Moscow (Vykhino Metro) — Lyubertsy (Turist Subdistrict) for "also known as."

Was the article useful?
Please specify why
Thank you for your feedback!
Please tell us what you didn't like about this article:
Previous
3.14.1. Drawing: ground transport
Next
3.14.3. Public transport route options
You can also go to