The Rapid transit category contains lines and stations in metro and light metro systems, rapid trams, rapid transit buses, urban cable cars and monorails, funiculars and other systems that transport passengers and do not run along city streets.

3.13.2.1. Rules for drawing sections of a rapid transit line

When drawing rapid transit line sections, you must adhere to the following rules:

Rapid transit lines are a simplified representation of the entire route of the transport vehicle.

Only draw route branches if they have the same name or number as the main route. If the number or name of a branch is different, it's considered a different route altogether.

Don't draw any additional rapid transit line sections that are not publicly available (such as service tracks that connect different branches, depots and their access tracks).

Use railway, tram track, and motorway items to draw detailed track arrangements, (depending on the type of transport).

Don't draw metro lines on Yandex Map Editor that are under construction.

When drawing rapid transit stations, you must adhere to the following rules:

Rapid transit station placemarks represent the stations themselves, as well as the stops that the transport vehicle makes there.

Place rapid transit stations directly on the rapid transit line that they relate to. The green arrow in the drawing points to a station that was placed correctly and the red arrow indicates an incorrectly placed one: 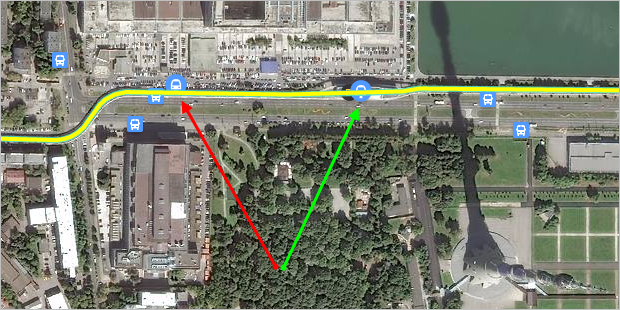 Draw polygons representing a metro station (including those under construction) as Territory items of the Transport type: 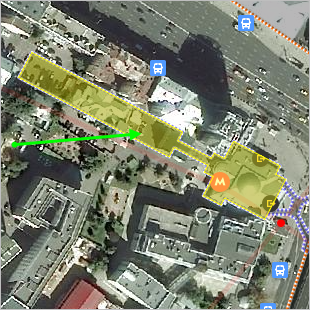 Stations and exits that are abandoned or under construction are not indicated with placemarks.

Metro stations and exits that are closed temporarily (i.e. closed for renovation) can be left on the map.

When drawing exits from rapid transit stations, follow these rules:

Don't draw exits from cable-car and funicular stations that operate at ground level.

If a station is fully or partially underground or has a closed-off area accessible only through a turnstile, “all of its exits” must be drawn as Rapid transit station exit placemarks (station halls, underground passageway exits, entrances and exits from the closed-off area, etc.)

If a station is located at ground level and the perimeter is not fenced-off, then put the "exit" at approximately the same location as the station itself.

You can put two exit placemarks on the map if the station platforms are located on different sides of the road intersection: 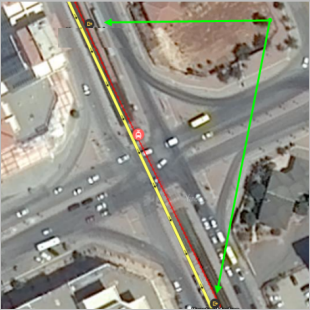 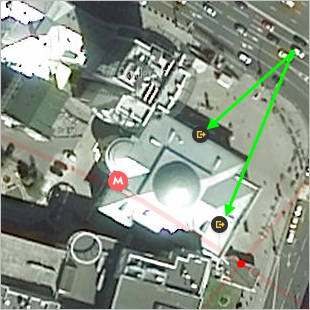 Whether a particular vehicle can be considered a rapid tram or light rail is determined on a case-by-case basis.

If an LRT station is located at ground level, then put the "exit" at the approximate geometric center of the station itself.

If an LRT station is fully or partially underground, all of its exits must be drawn as “Rapid transit station exit” placemarks (station halls, underground passageway exits, etc.)

Was the article useful?
Please specify why
Thank you for your feedback!
Please tell us what you didn't like about this article:
Previous
3.13. Transport: rapid
Next
3.13.2. Adding attributes to rapid transit
You can also go to