Railway items include railway lines and sections of lines, stations, and platforms.

In the Map Editor interface and further in this section, the word “rail” is used as a synonym for “railway”.

Railway lines are drawn with one line only with the exceptions specified in Section 3.12.1.1.7.

Draw all railway lines that connect stations, junctions, stops, block posts, and rail yards regardless of their technical condition, form of ownership, and passenger traffic.

You can draw decommissioned railway fragments even if they are of an insignificant size. They should be drawn as “Railway line sections” not connected to a railway line rather than a part of a “Railway line” .

You should draw sections of siding rail and loops (those that lead to dead ends), as well as railway tracks that lead to industrial or agricultural map items, warehouses, storage facilities, or loading and unloading areas (including to carriers):

In this case, the railway line should include the sections of each track up to the nearest junction. Do not connect the tracks into a single line leading to a station by drawing sections that do not actually exist.

“Railway” lines on the map must comprise an interconnected network, like in real life.

For coherence, “Railway” lines may include sections of the existing access tracks connecting the line with the main network via the shortest route.

Connecting lines in railway hubs and junctions are drawn without any restrictions.
3.12.1.1.9
The same drawing rules apply to narrow-gauge railways (including children's railways), with the exception of the network coherence rule (Section 3.12.1.1.8).

The railway station icon is placed within the station building: 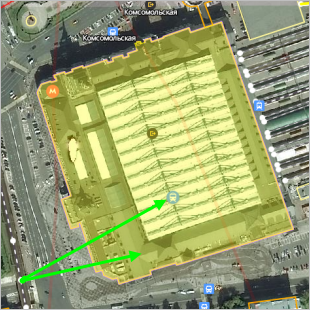 Railway stations are generally indicated with one placemark (icon) placed on the railway line at a point where the centerline is projected from the following items:

For example (the icon is placed on the railway line near the central point of the ticket pavilion): 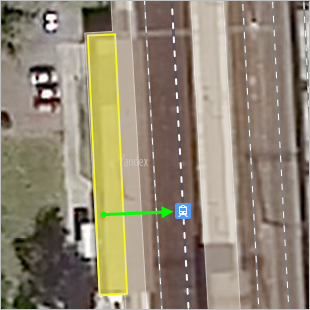 When plotting placemarks for railways or stations, make sure that they don't overlap with address points.

Draw stations that are not functioning but still exist as “Non-passenger stations”.

If a closed station was torn down, do not draw it.

This category of map items includes platforms for the following types of transit: railways (those platforms that rise above ground level), metro stations, rapid trams, and other rapid transit.

You can draw platforms that are in use, as well as those that are decommissioned (the main thing is to map any existing platforms).

Was the article useful?
Please specify why
Thank you for your feedback!
Please tell us what you didn't like about this article:
Previous
3.12. Transport: Railways
Next
3.12.2. Adding attributes to railway items
You can also go to