When drawing addresses, the following rules should be followed:

For example, there should not be two addresses named “1” that are linked to Iunost Square in Zelenograd.

Address points should be placed inside the building polygons (footprints) they correspond to.

An address point should be placed inside its building's footprint whenever possible.

Address points should not overlap with one another or other map points (such as organizations). Overlapping makes it difficult to display and edit map items. Also see Section 2.5.1. Places: drawing techniques.

If an address is not assigned to the entire building, but rather to each of its individual entrances (such as in Kaliningrad), then all address points should be located on the line that runs parallel to the longest side of the building: 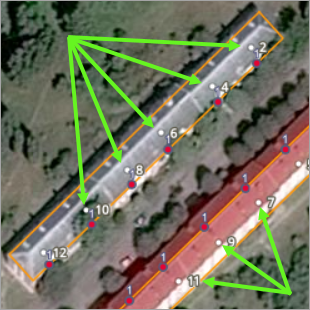 If one address is linked to several buildings in an industrial zone, then place the address point at the main (administrative) building. 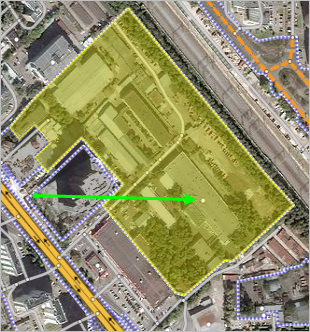 If one address is linked to several buildings connected by a passageway, then place the address point at the building where the main entrance is located: 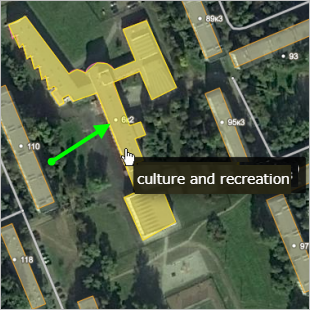 If one address is linked to a building with separate wings, then place the address point at the main building. 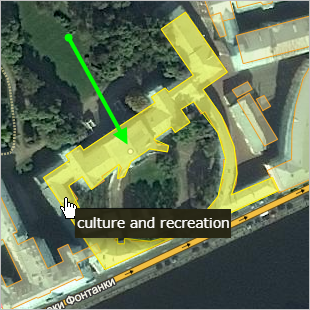 If an address point corresponds to a building with a complex shape, the point should be placed on the part of the building that runs along the road (picture on the left). If there is no such part (or the object's shape is too complex), place the address point closer to the building's center (right picture).

3.5.1.9
If two or more addresses correspond to the same building:

If a building has two or more addresses, and its footprint has a shape of a square or rectangle, place the address points next to each other in the footprint's center:

If a building has two or more associated addresses which correspond to different streets and its footprint is made up of rectangles (e.g. it's T-, U-, or L-shaped), then the address points should be placed on the footprint's edges in a such a manner that each point is “closer” to its associated street.

If a building is demolished and erased from the map (see p. 3.1.1.3), the associated address point must also be removed.

If an area is vacant after its buildings have been demolished but still retains its address according to official sources, then its address point must be kept as is. However, if the area itself becomes inaccessible after the subsequent redevelopment, then the access point should still be removed. See also point 3.5.1.12.

Don't mark addresses whose numbers are not known.

There should be no address points with the “no address attributes” attribute on the map.

You can put addresses that are assigned to an area (territory) on the map, even if there are no buildings there.

For example, this could apply to newly formed cottage settlements where no construction has yet taken place.

If an address doesn't have an official name but does have a local one, you can place an address point provided the address meets the following criteria:

Was the article useful?
Please specify why
Thank you for your feedback!
Please tell us what you didn't like about this article:
Previous
3.5. Addresses
Next
3.5.2. Adding attributes to addresses
You can also go to