One of the types of rapid transit items is the light rail transit system (LRT) , which features high-speed trams and “light rail” (if it is built similar to high-speed trams). Special drawing rules and attributes apply to LRT systems (see below).

The attribute panel for rapid transit line sections looks like this: 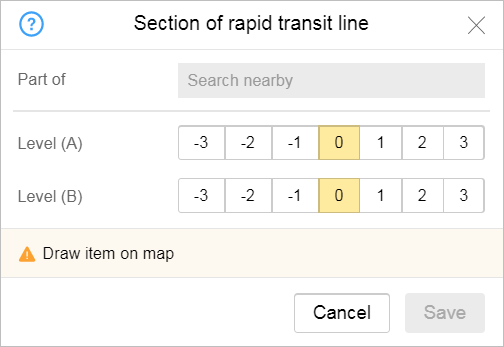 When adding or editing attributes of rapid transit line sections, you need to follow the rules that apply specifically to these attributes:

The “Part of” attribute indicates which rapid transit line the section belongs to.

If the rapid transit line is already drawn on the map, select its name from the list. To add a new line, fill in the field manually: 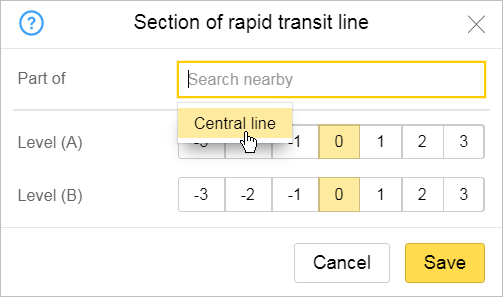 After the item is saved, the name of the line is displayed on the panel as a link that opens the line editing panel. Editing techniques for such composite linear items are described in Section 2.6.2. Composite linear objects.

Do not edit the Level A and Level B attributes for rapid transit lines.

The attribute panel for rapid transit stations looks like this: 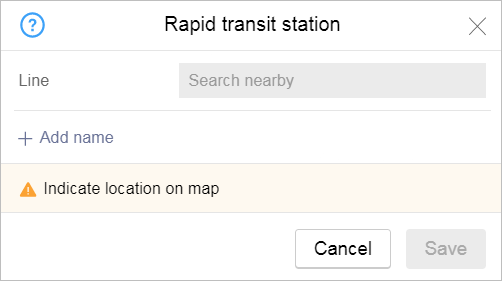 When adding or editing attributes of rapid transit line stations, you need to follow the rules that apply specifically to these attributes:

If the rapid transit line is already drawn on the map, you can select its name from the list. If the line wasn't drawn yet, create it first and then select it from the list: 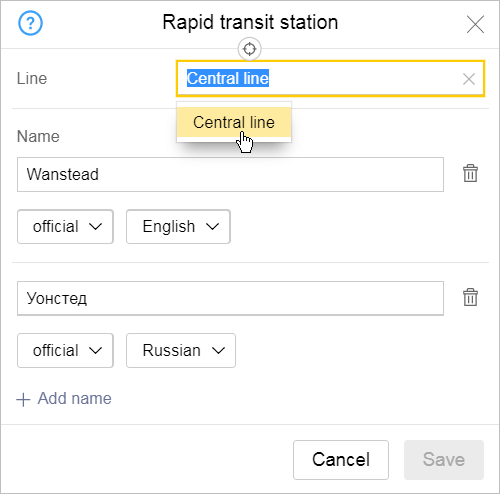 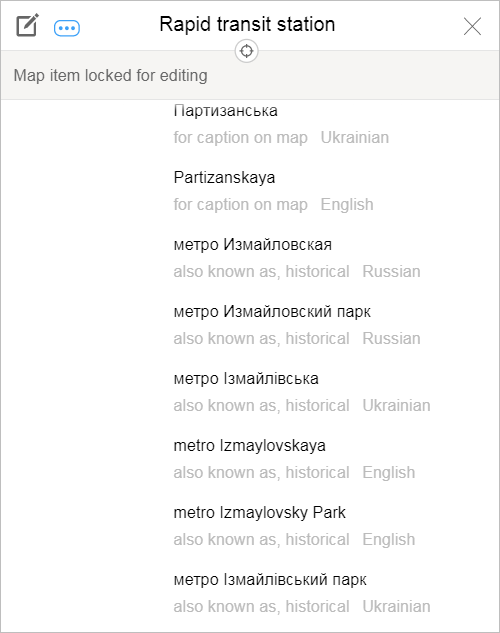 The attribute panel for exits from rapid transit stations looks like this: 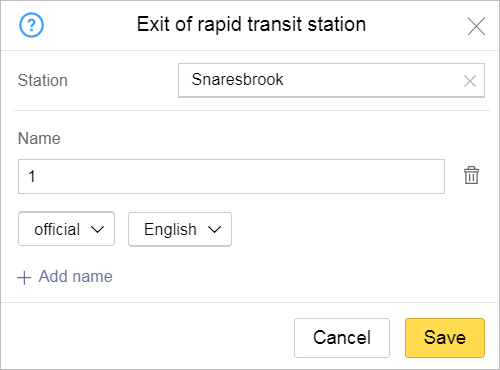 When adding or editing attributes of exits from rapid transit stations, you need to follow the rules that apply specifically to these attributes:

For each exit from a rapid transit line station, the parent station should be specified.

The name of the exit from a rapid transit station is indicated only if it has a proper name, number, or other identifier; otherwise , do notcaption them.

Indicate the name, number, or other identifier of the exit as its “Official”name.

The “For caption on map” name type should only be used when an exit has an official name that needs to be shortened. This abbreviated name should be used as the caption.

Some examples of official names:

1) The streets, addresses, and landmarks that an exit leads to (for example, exit to Andropova Avenue, Orbita Cinema, Kolomenskoye Nature Reserve , etc.), are not their proper names.

2) The exit's name, number, or identifier must notinclude:

Was the article useful?
Please specify why
Thank you for your feedback!
Please tell us what you didn't like about this article:
Previous
3.13.1. Drawing: rapid transit
Next
3.14. Transport: land
You can also go to