3.2.1. The rules of attribution of administrative units

Use the attribute panel to add attributes to map items belonging to the “Administrative division” category. 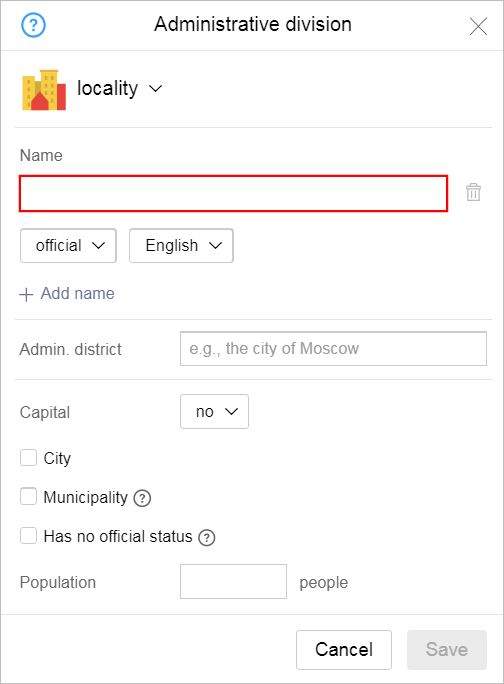 Rules for adding attributes to items can be found below. 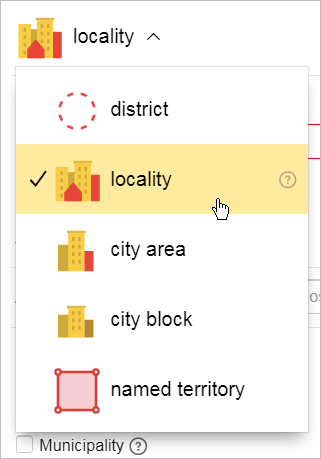 The available types of administrative divisions form a hierarchy: every division includes divisions of an equal or greater level within it. For more information, see Section 3.2.2.3. Administrative subordination.

Rules for setting names are described in Sections 3.1.3.1. Name types: general rules and 3.1.3.2. Rules for entering all types of names.

Additionally, when you enter values for any of the “Name” attribute types for various types of administrative divisions, you must follow these rules:

This name type is mandatory.

The full name of the division that is recognized in that country.

Usually it includes the type of map item.

Rules for setting this type of names are described in Section 3.1.3.1.1. Official.

Use this field if the item's caption on the map should differ from its official name.

Rules for setting this type of names are described in Section 3.1.3.1.2. For caption on map.

Caption names typically do not include the map item type unless one of the following exceptions applies:

In these cases, the caption name should include an abbreviated type name.

Enter this name for administrative divisions if their address name differs from their official names. Also see Section 3.1.3.1.3. As part of the address.

The “Parent division” panel indicates the administrative division that is one level above the item you are adding.

This is how the administrative division hierarchy is formed on the map.

When administrative divisions of the same type belong to different hierarchy levels, it is referred to as division nesting.

Some items may have two positions in the administrative division hierarchy. For example, Moscow is both a level 4 (locality) and a level 2 (sub-federal unit).

Additionally, sometimes levels can be skipped in the hierarchy. For example, a block (level 7) can have a parent division that is a level 4 “locality” (for more information, see point 3.2.2.3.7).

Divisions at this level can not be created or edited on Yandex Map Editor. They function solely as items that lower-level administrative divisions can be linked to.

Second-level administrative divisions can be nested.

Second-level divisions can not be created or edited on Yandex Map Editor. They function solely as items that lower-level administrative divisions can be linked to.
3.2.2.3.3. Regional area (level 3)

“District” is the general term that refers to districts, provinces, republics, and autonomous areas. Municipal areas of Russia that are divided into urban and rural settlements, city regions in Russia, mayorats in Kazakhstan, and regional districts of various countries all belong to this level.

The parent division for districts is the region (level 2).

Level 3 divisions are the parent entities for individual “Localities” (level 4) located on their territories.

Level 3 (“Districts”) map items are the parent urban/rural areas that these level 4 localities belong to. If there are no urban or rural settlements, then the municipal district or city region that the locality is located on will function as the parent item.

For gardening co-ops of the same name, a minimum administrative division that completely encompasses them is selected as the parent.

Localities (Level 4) are the parent items for level 5 items.

Nesting is allowed for city districts.

For level-7 blocks, an administrative unit with the smallest area that completely encompasses that block is selected as the parent (except for those of the area of the city and the named territory types).

If the division in question is the administrative center, then select its hierarchical level from the list:

If an administrative division of the “Locality” type is a city, then check the box in the City field.

Check the box in the Municipality field if an administrative division is a “municipality” that has its own address system (i.e. there are no independent official localities within its borders). These municipalities are the parent items for all elements with addresses on their territories (streets, blocks, farmsteads, neighborhoods, individual addresses).

Even though these municipalities are not officially localities, they should be assigned to the “Locality” hierarchy level.

For example, communes in France, quarters in Turkey, etc.

In other cases, do not check the box.

Check the Has no official status box for administrative divisions of the following types:

Don't check the Has no official status box for any other administrative divisions.

This includes items of the “named territory” type: by definition these items already have no official status.

The term "population" refers to the number of registered inhabitants in a given locality or other administrative division. Use statistics published by state agencies or found on the official sites of local administrative entities to determine what the population of an area is.

Don't fill out the “Population” field for gardening co-ops, or rural (dacha) settlements that do not have permanent registered residents (or for which there is no data available).