Railway items on YME include sections of railway lines, lines in their entirety, platforms, and stations.

3.12.2.1. Rules for adding attributes to sections of railway lines

The attribute panel for a section of railway line looks like this: 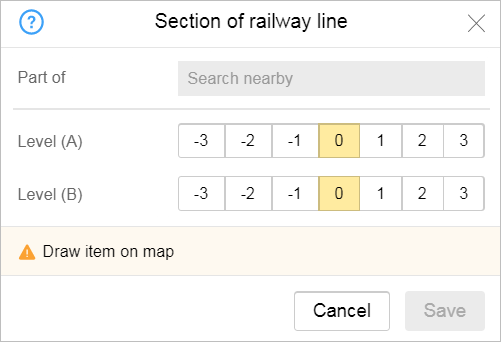 When you add attributes to sections of railway line, follow the rules that apply specifically to them. The attributes for items are listed below, as well as the rules for entering values for each of them:

The Part of attribute indicates that a section of railway belongs to a certain line.

If the railway line was drawn earlier, then you can choose its name from the list. If not, then you must fill in the field manually (which creates a new railway line): 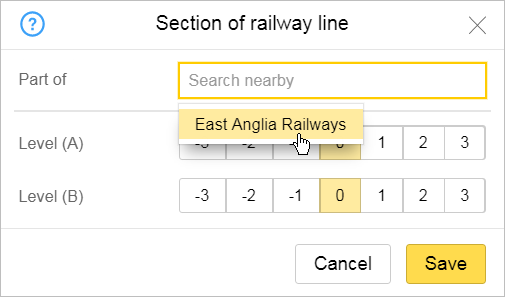 After you save the item, the name of the railway line displays in the panel as a link that opens the railway's attribute panel:

Don't link railway fragments that were decommissioned to a railway line.

You can name the following map items:

Nameless lines that don't have legal or generally accepted names should be left nameless. Furthermore, you can name these lines based on their route section (such as “Ozherelye — Uzlovaya”).

Names of industrial railways, factory branches, and depot track arrangements are allowed if they don't infringe on the general mapping rules in regards to items and attributes that are forbidden from being mapped on YME.

To ensure that railway lines that cross at different levels (such as when one goes through a tunnel and the other is at ground level) display correctly, enter level values in the Level A and Level B fields to represent the beginning and ending points for the road section:

For example, the drawing shows the values for levels at a railway intersection where two run over a bridge located above the third one: 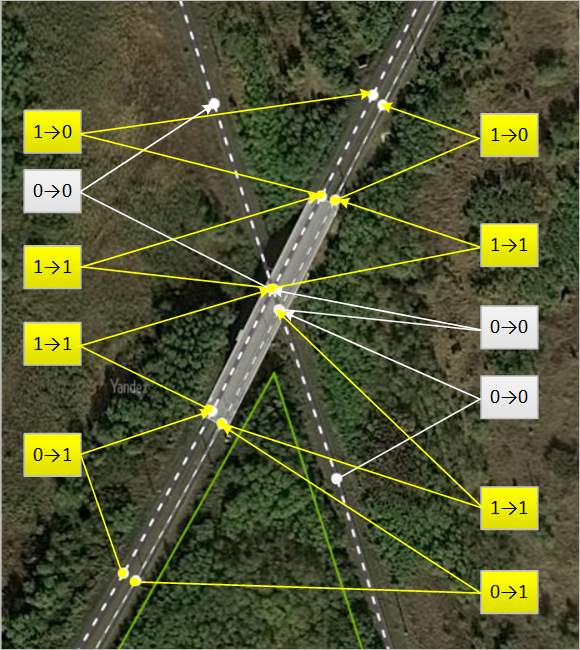 The sections of road that approach a bridge and have the values [0—1] or [1—0] for levels A and B should not be longer than the length of the bridge itself.

If a section of railway that is the same length as the bridge itself doesn't include a single intersection with other railways, then you must create an additional point on the track in order to lower its level.

The attribute panel for a railway station looks like this: 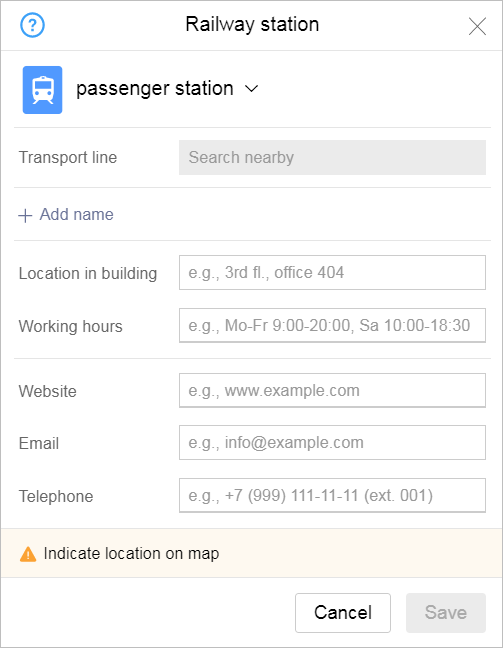 When you add attributes to railway stations, follow the rules that apply specifically to their attributes.

The “Transport line” attribute indicates that a station (see below 3.12.2.2.2. Type) belongs to a certain railway line.

The following are given priority when entering information about transport lines:

When naming railway stations, sidings, loops, travel posts, checkpoints, and station parks (referred to from here onwards as “stations”), you must follow these rules:

It is preferable to use the Type + Proper name format for railway stations (sidings, platforms, stops, block posts, and station parks). If a map item's type is not known, you can just use its proper name.

You should also name all railway stations and terminals that have proper names.

The name of a train station with a terminal is considered "proper" if it differs from the name of the station part itself. The following are proper names:

Do not assign names to un-named depots.

When naming train stations, use your discretion on what sounds best: the item type may come before or after the name.

In the “Name” field group, enter the following for the different name types:

Names of train stations in Russia can be found in open sources.

When entering address information for train stations (including the website, email address, and phone number), follow these rules:

You must enter the train station's email address in the “Email address” field station.

The attribute panel for a railway platform looks like this: 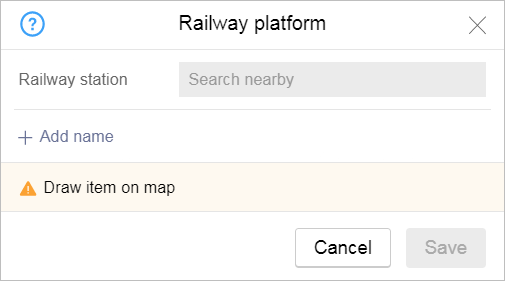 Follow these rules when adding attributes to railway platforms:

The attribute indicates which platform a given railway station belongs to.

Indicate the number and type of platform in the official name field for numbered platforms.

Indicate the name and type of platform in the official name field for named platforms.

When naming, follow the same rules for name formatting that apply to motorways (see Section 3.3.3.3. Name of road).

Was the article useful?
Please specify why
Thank you for your feedback!
Please tell us what you didn't like about this article:
Previous
3.12.1. Drawing railway items
Next
3.12.3. Adding attributes to railways
You can also go to