During the month of September, the global tech community recognizes three important celebrations relating to Yandex:  Programmers’ Day, Online Learning Day, and National Coding Week.  Here in the Yandex community, we are always appreciative of the work of our thousands of programmers and learners of all ages in our educational programs. For these occasions,  we wanted to extend a special thank you to our community of professionals, instructors, and students who are all helping grow the data science field and working to shape the future of tech in our lives.

In honor of the celebrations, we will share stories from some of our programmers on what inspired them to study coding and how they began their programming journeys, plus share more about our educational initiatives.

When I was about 10 years old, my father first showed me how to code some very simple things. I had already had a computer for many years but used it only for games. My first program had just a green circle moving to the right, but it was like a wow-effect for me. I realised for the first time that things in a computer work not in a magically predefined way, but I that I can make them work how I want them to work.

I think that the beginning of my interest appeared in my childhood, when I was about 7 years old. My dad was interested in computers and in our home we had the ZX Spectrum, and after that a PC based on i486. I suspect that this partly prompted me to get a degree in mathematics-programming.  Then I got my first job as a developer in a small Novosibirsk company.  Since then I have realized that programming is exactly the area in which I would like to work.

I was around 9 when my dad brought me to computer classes. Frankly speaking, I didn't like them at first. Computers were not yet everywhere in Russia at that time, so I quickly realized that being able to program simple games in BASIC earned me some brownie points in classmate's eyes. That was my secret superpower, much like a superhero’s, but real.

It's funny that now I can say computer games drove me to learn more about coding. When I was about 5, we had an old computer, ‘Master.’ On this computer, you had to load games from a cassette. There was a start screen before loading the game - a BASIC console. One day the cassette was broken, so the only way I could use the computer was to try commands I found in the manual.

As the experiences of our programmers show, we are often inspired by a subject at a young age when we have welcoming opportunities and positive experiences.  At Yandex, we believe in helping create more of those opportunities for young learners.

Beyond the Yandex company programmers, our community includes Yandex.Lyceum, a program available to teenagers interested in coding, which is taught at 129 locations in 58 cities across Russia and Kazakhstan.  Currently, up to 4,000 students are enrolled in Yandex.Lyceum to learn the fundamentals of programming in Python and those of industrial programming.  Since 2011, we have also hosted a coding competition, Yandex.Algorithm, which is open to aspiring developers as young as six.  In 2018, Yandex.Algorithm welcomed over 11,500 people from 93 countries to test their skills. 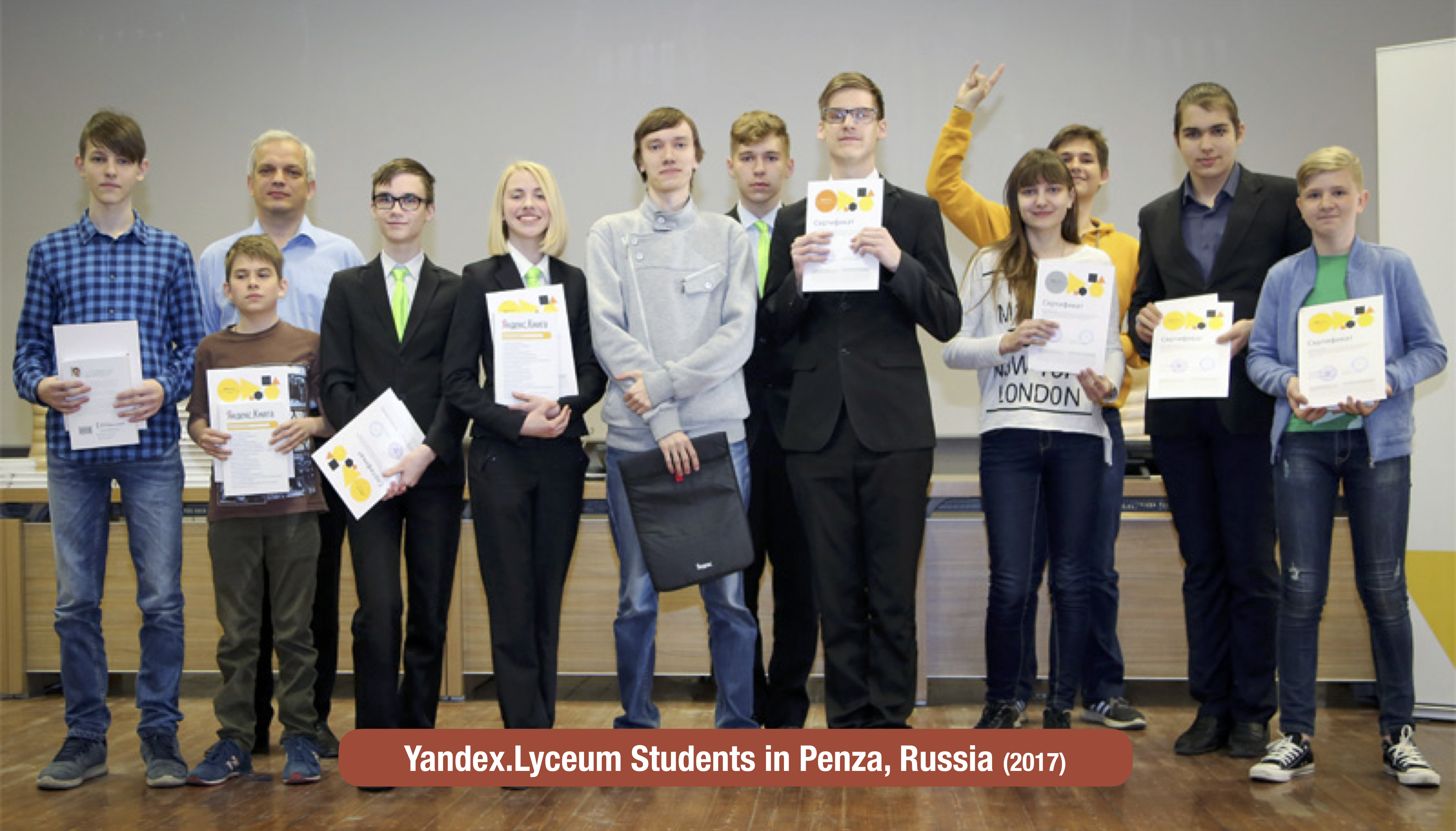 Our community and journeys in programming don’t stop there.  A big part of our data science community is centered around the Yandex School of Data Analysis (YSDA), which was established in 2007 to offer a free Master’s Level program in Data Science and Data Analysis. Today, YSDA spans five branches and boasts over 700 graduates who are working in the world’s leading tech companies.

Most recently, YSDA launched a one-year career advancement program in Israel, where Yandex also created the Yandex Machine Learning Initiative at Tel Aviv University to support undergraduate studies.  The YSDA community also expands a global reach through Coursera courses, 15 of which are taught in English.  Since 2016, nearly 64,000 people have learned C++, Python, and JavaScript via our online courses.

Many Yandex employees and graduates of YSDA realized their potential and interest in programming through opportunities in higher education:

My love of writing code began at the university with programming robots. This is a good example of how something virtual, expressed as lines of code, can con control something physical - the "hands" of robots.

During my third year at Moscow Institute of Physics and Technology (MIPT), we had to choose a science company to work with.  We had a tour of a company which worked on computer vision and object detection, areas I really liked, so I decided to apply there. It was then that it occured to me that I should work in programming, and that’s how I chose this profession and have never regretted it.

I didn’t plan on being a programmer - I started university wanting to be the head of an IT startup.  But I always thought that you should be well-versed in what you are going to lead - so I went to MIPT and learned to program.  After my second year I went to work as a C++ developer, after my fourth year I ended up getting a job at Yandex as an analyst-developer.

Whether you are a young student just learning Python or a professional looking to make a career change into machine learning, there are countless opportunities ahead. Congratulations to everyone in the coding community on Programmers Day, Online Learning Day, and National Coding Week!