You must observe the following rules when drawing sections of tram lines.

Don't draw sections of tram lines in a depot.

An exception to this rule concerns tram tracks that form circles, which can be drawn using more than one line. For example: 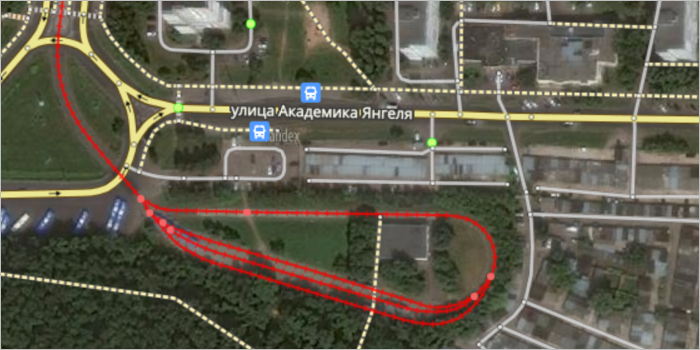 This section contains rules for drawing stops for ground-level public transport in urban and suburban areas, as well as stops for inter-city buses if they are located outside of bus stations.

The rules for mapping bus stations, marinas, and stops on rapid transit lines are described in the corresponding sections.

When drawing ground transport stops, you must adhere to the following rules:

You can draw transport stops on YME regardless of whether or not they are equipped for passengers to embark or disembark. When drawing stops, the actual location takes priority over the information provided in registries, websites, and so on.

If you don't know the actual location of a stop in a rural area, you should draw at least one stop for each rural settlement on or near a transport's route, even if no actual stops exist there (see section 3.14.1.2.1.2.2).

Transport stop infrastructure includes the parts of the road that widen to accommodate bus stops and/or bus shelters.

All places with infrastructure for passengers to get on or off vehicles should be treated as items in the “Ground transport stop” category (i.e. not just actual stops, but also locations which are equipped for it even though no vehicles stop there at present).

The stop icon (place) should be placed approximately in the center of the passenger shelter rather than the actual location the transport stops at. If there is no passenger shelter, place the icon on an equipped waiting platform. If there is no equipped platform, place the icon on the edge of the traffic area or on the side of the road across the widening meant for public transport parking.

Add an unequipped stop if the following are true:

Put the placemark for an unequipped transport stop where the signage is located (if there is no signage, then on the curb).

If you don't know location of a bus stop, draw it near a large turn, intersection, store, or any other location with high passenger traffic.

If you're absolutely sure that a bus doesn't actually stop in the locality (despite register and bus station data saying otherwise), don't draw the stop there.

Inter-city routes can act like suburban routes in cases when suburban service is canceled or hindered and passengers have to resort to inter-city transport to travel within the area.

Draw tram stops at the spot where passengers wait for the tram to arrive.

If passengers board the tram in the middle of the road, but the waiting area is located at the curb, then draw the stop at the curb.

You can also draw the following public transport stops:

Don't draw public transport stops in cases where they only exist in a time-table, but there is no actual infrastructure in the area so that transportation vehicles skip them.

“Do not draw” the following using the Bus station category:

If a bus station occupies part of a building that belongs to another organization (for example, a railway station or shopping center), then put the bus station placemark on the edge of the polygon for that building.

Was the article useful?
Please specify why
Thank you for your feedback!
Please tell us what you didn't like about this article:
Previous
3.14. Transport: land
Next
3.14.2. Adding attributes to ground transport items
You can also go to