This was a big year for Yandex.Music, as we expanded to three new countries (Armenia, Uzbekistan, and Israel) and our streaming service became available through new platforms, like our Yandex.Station smart speaker and Yandex.Phone.  Yandex.Music provides over 20 million listeners in six countries with access to tens of millions of tracks. As 2018 comes to a close, we wanted to take a look at what our users on Yandex.Music have been listening to the most over the past year.  We’ve looked at stats for each country and found a few key trends that stand out.  The Yandex.Music experts found the most popular artists for each market, as well as the most streamed foreign and Russian-language artists.

Pop, dance and rap artists delivered the most popular tracks in each country, with our listeners in most markets having fairly similar tastes.  The most popular song in four of the five countries was “In My Mind,” the dance hit by Dynoro and Gigi D'Agostino.  Only in Kazakhstan was the song edged out for the top spot, with our listeners there giving the most streams to “Medina” by Kazakhstani rapper Jan Khalib.  DJs Dynoro and Gigi D’Agostino were not the only Western artists to be heavily streamed, as other familiar names such as Sia, David Guetta, Calvin Harris, and Imagine Dragons had tracks popular among our listeners in all of our countries. 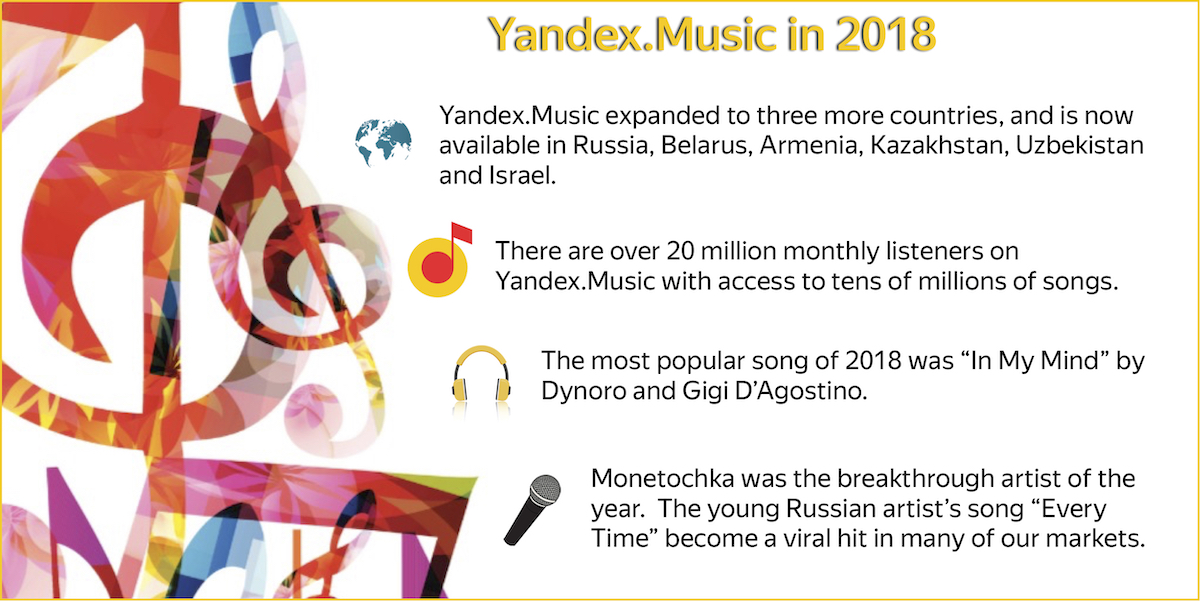 Yandex.Music users were also particularly fond of Russian-language artists.  Aside from Jan Khalib, whose “Medina” was one of the most streamed tracks on Yandex.Music, many other singers who perform in Russian filled out the top 10 lists.  In Russia, Russian-language artists nabbed half of the ten most popular tracks, but they were popular in our other markets as well.  Some constants included LOBODA, an established pop favorite across the Russian-speaking world, whose hit “SuperSTAR” was one of the most streamed songs in nearly every market.  The rapper MATRANG was also popular on multiple charts, as was singer Philipp Kirkorov.

One of the most notable breakthrough successes of 2018 on Yandex.Music was Russian singer Monetochka.  The young pop artist was discovered mainly due to her YouTube performances becoming viral, and her May album, “Coloring For Adults,” was a huge hit on Yandex.Music.  Her song “Every Time” was one of the most streamed tracks in nearly all of our markets.

Some other standout artists also had a good year in the markets served by Yandex.Music.  MARUV is a Ukrainian pop singer who typically records in English, and scored one of the most popular songs in Russia with her collaboration with producer Boosin, “Drunk Groove.”  Another one of their English collaborations, “Black Water,” was a hit as well, especially in Kazakhstan.  While Dua Lipa will likely be familiar to our international readers, less known may be the Korean pop group BLACKPINK.  Not only was their English and Korean song “Kiss and Make Up” the second most popular song in Israel, but Israel was the only Yandex.Music country where their song made it into the top 10.

We’re happy to continue providing our millions of listeners with a great, easy way to listen to their favorite tracks.  Here’s to an even bigger 2019!