Comparison of search traffic for your site and similar sites

Yandex.Webmaster collects and analyzes statistics on search queries that brought visitors to your site from search results. The data source is Yandex.Search. This data is used to generate a report that allows you to compare your site's search traffic with similar sites for the same period of time.

The group of similar sites is selected based on the site topic.

To view a report:

The report shows statistics for your website and a group of similar sites in the selected category.

How indicators are calculated

The report contains two indicators: the average number of clicks for your site and for a group of similar sites. The data is calculated for the chosen time period by the so-called report points. The report point is a day, week, or month, depending on how detailed the report is. For each point, the number of clicks is counted. The first point in the report is the first time period when the traffic to your site and similar sites was recorded. For example, if the level of detail is by day, the first point is the first day for which Yandex.Webmaster has the click data.

Search traffic is characterised by average indicators. This provides a general idea about the dynamics of site traffic from search queries.

In some cases, the number of clicks in the table differs from the numbers in the graph. For example, if the following parameters are chosen at the same time:

In this case, the graph shows only the selected time interval. In the table, the interval is supplemented with time intervals based on the level of detail. 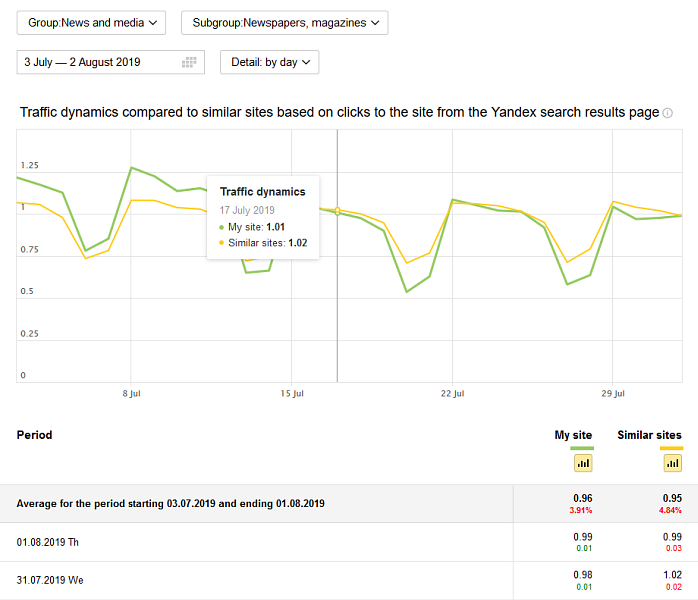 Data might be missing from the report if the Yandex.Webmaster database contains insufficient data to make the calculations.

You can use the report to see whether the site changes have affected the dynamics of traffic coming from the search results.

For example, you noticed that the traffic dropped over the last month. If theMy site line and Similar sites line change similarly over a time period, it's likely that the decline in traffic is not related to changes on the site. Seasonal changes might be one of the factors involved.

If the My site line falls and the Similar sites line rises at the same time, it is likely that changes on the site affected these indicators. The number of clicks may go down if the site lowers its position in the search results for the analyzed search queries. The reasons for this may be:

You can check for these reasons in the Diagnostics section in Yandex.Webmaster.

If your question is about the site's ranking falling, go to How do I improve the site ranking in the search?.
Was the article useful?
Please specify why
Thank you for your feedback!
Please tell us what you didn't like about this article:
Previous
Managing groups of queries
Next
Recommended queries
You can also go to