Run the project in the Sandbox first. This helps you avoid making mistakes and spending money on a task that isn't working right.

Surveys are designed to collect information for research purposes. The number of respondents is set in overlap, and the requirements for them are set with filters.

You may need additional projects for your task, such as dataset pre-check or checking performers' responses. Learn more about this in Designing the solution architecture.

Suppose you want to know where Russian-speaking respondents have breakfast and what they prefer. To do this, create a single task on a page and in the pool, so the performer sees several questions with response options. 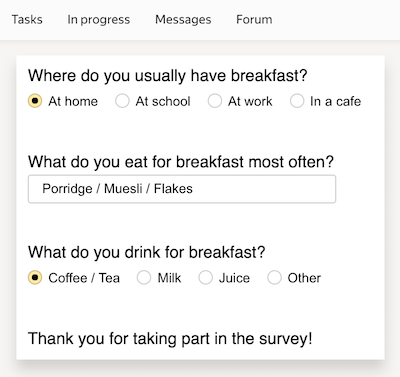 To run tasks and get responses:

Prepare your own task file. Check out the example in a demo TSV file. You can find it on the pool page. At the top-left of the page, there are links to TSV files with regular, control, and training tasks.

Quality control rules allow you to filter out inattentive performers. You can configure quality control both in the project and in the pool.

The survey includes an auxiliary input field. You can use it to pass any information, and it won't be visible to performers.

Upload one task and use the overlap parameter to enter the number of people you want to survey.

Was the article useful?
Please specify why
Thank you for your feedback!
Please tell us what you didn't like about this article:
Previous
Tone evaluation and content moderation
Next
Business information
You can also go to