This report lets you track conversions for clients who visited your site from several different devices (for example, if someone went to your site on a desktop computer first, then returned later on their laptop, and placed an order on their mobile device). The data in the report can help pinpoint what your conversion rate is in relation to device type so that you can distribute your budget more effectively across every marketing channel.

If a user views your site from a mobile device and then places their order from a laptop, other Metrica reports will attribute these conversions to the laptop. In the “Cross device” report, however, this conversion will be recorded in the user's session group for both device types.

Crypta technology allows us to factor a user's entire history of sessions and actions on different devices into the report.

Ways to use this report

See how users with different devices and activity complete conversions

To view the report, select a goal. 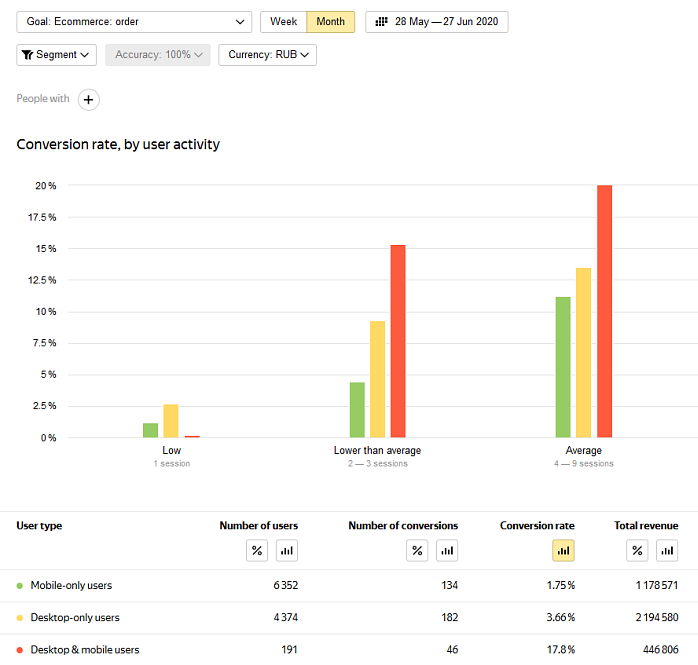 Let's say that a user sees your ad on their smartphone and taps on it to get to your site, but they don't complete the target action. Then the user returns to your site at a later time from their laptop and places an order. You need to know what source the conversion occurred on.

You can use the standard Sources, summary report and select the Last non-direct click attribution model. Yandex.Metrica will search for the ad source across the entire session history (by using browser cookies to determine the user), but only direct traffic to your site will be identified as a source. So you won't know what impact mobile ads had.

To determine what conversions resulted from mobile ads, you just have to select that segment in the “Cross device” report. You must enter a traffic source as a condition (for example, Sources → One of traffic sources → Ad system).

Conditions for getting the report

The report will be available if all the following conditions are met:
Note. The report is based on data for the past 90 days. Data is not displayed for a longer time period.

Users and their activity level

The report divides users into types:

You can use the additional settings to select the sessions to show in the report. 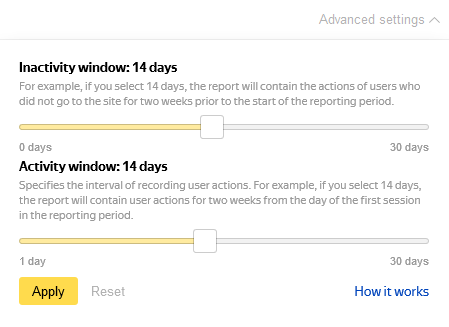 The number of days before the report's start day when the user did not visit the site. Setting the number of days allows you to filter out only the users who visited your site during the period of activity you entered.

Let's say that for most customers, five days elapses between their first or regular session on the site and the conversion (or declining to order). In this case, the window of inactivity should be about one and a half times longer (for example, seven days). This means that the report won't include information about users who went to the site right before the start of the report period and who also usually take longer to convert.

For instance, the report is created for the period from May 1 to May 30 and the inactivity window is five days. A user went to the site on April 25 (six days before the start of the report period) and converted on May 1.

If you don't increase the window of inactivity, the report data will be skewed, as if there was a single session on May 1 and the user converted during it.

If you choose an excessively long window of inactivity (20 days instead of seven), the report will show information about users who return to the site less often than normal.

Number of days since the user's first session during the indicated report period. You can change the quantity that's entered by default. The activity period may be longer or shorter than the date interval that the report is generated for.

For the window of activity, set the time that it usually takes for customers to complete a conversion. Let's say that for most customers, five days elapses between their first or regular session on the site and the conversion (or declining to order). If the report is created for the period from May 1 to May 30 and the activity window is five days, for a user who started the conversion cycle May 10, the sessions and conversions from May 10 to May 15 will be included in the report.

Conversions in this report refers to the percentage of site users who completed a target action during the specified window of activity.

If your site uses E-commerce, data in the report will be calculated taking the purchase action into account. You can select this action as a goal by flipping the Goal switch to on. You can also select any of the goals you created earlier (including the offline conversion goal, target calls, or a multi-step goal).

Note. If you created a new goal, it will take some time to gather statistics.

In addition to conversion rate, the following metrics are available for the goal you selected:

The revenue metrics show non-zero values for goals that are transmitted with E-commerce data and goals where a value is transmitted.

This report supports segmentation and sampling.

Was the article useful?
Please specify why
Thank you for your feedback!
Please tell us what you didn't like about this article:
Previous
Conversions
Next
Summary
You can also go to