“Road structures” include bridges (including pedestrian ones), piers on stilts (drawn as bridges), underground and above-ground pedestrian crossings, tunnels, and squares (including those with proper names). This also includes squares within localities that are intended for public events, are paved, and have a defined territory.

Road structures intended to provide a passage over small waterways and consisting of pipes and embankment “should not” be categorized as “Bridges” or Tunnels.

The shape of polygons should match that of the actual structure; diagrams are not allowed.
3.8.1.1.2
Items in the “Road construction” category are drawn and edited using the techniques described in Section 2.7.3. Simple contour objects.
3.8.1.1.3. Drawing bridges and pedestrian overpass

When drawing bridges and above-ground pedestrian crossings, pay attention to the possible displacement in the satellite image of the bridge surface or passage crossing from its position on the map that can be attributed to its elevation above the surface (see Section 2.3.1.4. Bridges).

The extent of this displacement (green arrows in drawing) may be significant enough to affect the position of the bridge road within the broader road network: 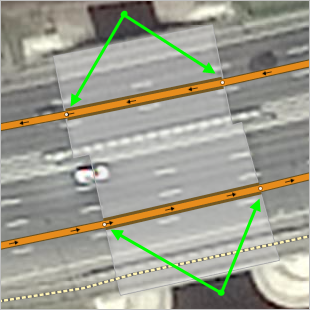 When drawing bridge polygons, the borders should align with the expansion joint where the bridge road connects to other road sections (if these are visible on a panorama or satellite image):

If you can't see the expansion joint, then draw the polygon based on the points where the bridge road rises from the ground (even if that will result in non-right angles): 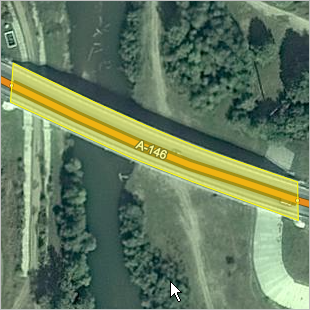 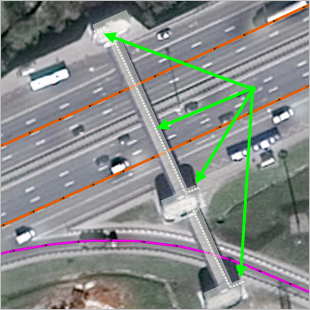 You should not exclude any sections of the crosswalk from the polygons because that would split it:

Draw square borders based on building facades. If there are no facades, then base your drawing on the outer edges of the roadways that border the square: 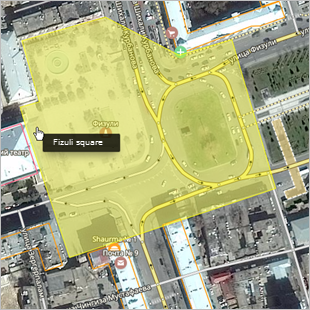 If there is a named “square”, and nothing remains of that road structure but there are addresses linked to that square that are located along a named road of class 7 or higher, than enter the square name for that road (as a “street in locality” type) and don't duplicate it as a road structure.

For example, Freedom Square in Astrakhan:

3.8.1.2. The rules of attribution of road construction

The attribute panel for a road structure looks like this: 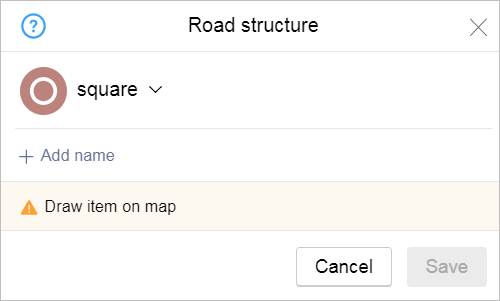 Was the article useful?
Please specify why
Thank you for your feedback!
Please tell us what you didn't like about this article:
Previous
3.8. Road infrastructure
Next
3.8.2. Parking lots
You can also go to