Roads in Yandex Map Editor are composite linear items that are not drawn on the map, but rather compiled from sections of road, each of which is drawn individually and assigned separate attributes (for more information, see Section 3.3.2. Attribution rules of sections).

There are two related components of the rules for drawing and adding attributes to road networks:

When drawing connecting road elements, the start and end points of each pair (or more) of road elements form objects Intersection. Intersections are created automatically in the process of rendering road segments (in the figure indicated with blue arrows): 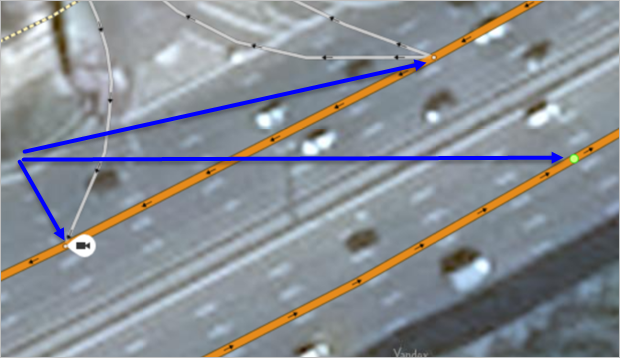 Additionally, road signs, traffic lights, and speed cameras may be linked to intersections.

Be careful when drawing roads. The road network is used to set routes, so drawing errors can lead to routing mistakes.

A road is usually a geometrically unified (connected) object. Of course, there are exceptions to this rule: there may be breaks in a road or a single road may consist of several sections that are separated from one another (although this separation is usually less than two kilometers in length).

For example, Flotskaya street in Moscow consists of two such sections (it is separated into sections by Onezhsky and Solnechnogorsky streets: 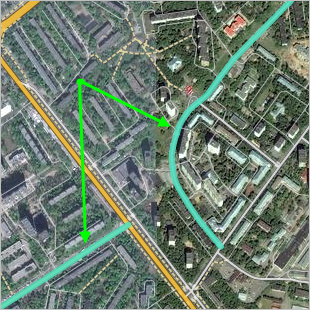 The road only includes sections that are officially components of that road. Passageways within courtyards, dead ends, or passageways between blocks in rural localities are officially not considered parts of roads and are not included in roads on maps.

When editing the road network, make sure that roads that have already been created on the map were not deleted. Other map items may be connected to roads (especially addresses), and these connections can get destroyed if you delete those roads.

So if the shape of a road is incorrect, you should edit the existing road section (rather than deleting it and starting over).

Was the article useful?
Please specify why
Thank you for your feedback!
Please tell us what you didn't like about this article:
Previous
3.2.3. Drawing the center of an administrative division
Next
3.3.1. Drawing roads and sections of roads
You can also go to

Previous
3.2.3. Drawing the center of an administrative division
Next
3.3.1. Drawing roads and sections of roads