MOSCOW AND THE HAGUE, July 31, 2012, Yandex (NASDAQ: YNDX), the leading internet company in Russia operating the country’s most popular search engine and most visited website, today announced its unaudited financial results for the quarter ended June 30, 2012.

“Yandex delivered 50% growth in the top-line and expanded profitability margins in the second quarter, driven by strong advertiser dynamics, solid search share performance and overall Russian internet market leadership,” said Arkady Volozh, Chief Executive Officer of Yandex. “Technology and innovation are the foundation of our company. Along with ongoing search enhancements, we deployed important new mobile, mapping, and cloud-based services that enhance the relevance of Yandex for users and advertisers across our markets.”

The following table provides a summary of key financial results for the three months and six months ended June 30, 2011 and 2012.

1 Pursuant to SEC rules regarding convenience translations, Russian ruble (RUR) amounts have been translated into U.S. dollars at a rate of RUR 32.8169 to $1.00, the official exchange rate quoted as of June 30, 2012 by the Central Bank of the Russian Federation.

Paid clicks on Yandex’s and its partners’ websites, in aggregate, increased 62% in Q2 2012 compared with Q2 2011. This growth in paid clicks continues to reflect our initiatives to attract new advertisers and increase the relevance of the ads on our own sites and the network. At the same time, average cost per click is 7% lower compared with Q2 2011, but up 18% compared with Q1 2012.

Yandex’s operating costs and expenses consist of cost of revenues, product development expenses, sales, general and administrative expenses (SG&A), and depreciation and amortization expenses (D&A). Apart from D&A, each of the above expense categories includes personnel-related costs and expenses, including related share-based compensation expense. Increases across all cost categories, excluding D&A, primarily reflect investments in overall growth, including personnel. In Q2 2012, Yandex added 133 full-time employees, an increase of about 4% from March 31, 2012, and up 16% from June 30, 2011. The total number of full-time employees was 3,474 as of June 30, 2012. Total share-based compensation expense decreased 32% in Q2 2012 compared with Q2 2011.

TAC increased from 16.0% of text-based revenues in Q2 2011 to 18.9% in Q2 2012, representing an increase in our Yandex ad network revenues’ share in Yandex revenues for the period.

Other cost of revenues in Q2 2012 increased 55% compared with Q2 2011, reflecting principally an increase in datacenter-related costs and utilities, personnel expenses and content acquisition costs.

SG&A costs in Q2 2012 were considerably lower as a percentage of revenues, and increased modestly in absolute terms, compared to Q2 2011 mainly due to IPO-related expenses and higher than usual advertising costs incurred in Q2 2011.

Total SBC expense decreased 32% in Q2 2012 compared with Q2 2011. The decrease is primarily related to the effects of variable accounting for certain options previously granted to advisors, included in the SG&A expense.

Interest income in Q2 2012 was RUR 234 million, up from RUR 36 million in Q2 2011, principally as a result of investing more of our cash provided by operating activities in Russia, where our investments earn higher returns. Additionally, we earned significantly more interest income in the Netherlands in Q2 2012 due to the investment of our IPO proceeds.

Foreign exchange gain in Q2 2012 was RUR 52 million, compared with a foreign exchange loss of RUR 34 million in Q2 2011. This gain is due to the appreciation of the U.S dollar during Q2 2012 from RUR 29.3282 to $1.00 on March 31, 2012 to RUR 32.8169 to $1.00 on June 30, 2012. Yandex’s Russian operating subsidiaries’ functional currency is the Russian ruble, and therefore changes in the ruble value of these subsidiaries’ monetary assets and liabilities that are denominated in other currencies (primarily U.S. dollar-denominated cash, cash equivalents and term deposits maintained in Russia) due to exchange rate fluctuations are recognized as foreign exchange gains or losses in the income statement. The U.S. dollar value of Yandex’s U.S. dollar-denominated cash, cash equivalents and term deposits was not impacted by these currency fluctuations, but they resulted in upward revaluations of the ruble equivalent of these U.S dollar-denominated monetary assets in Q2 2012.

Income tax expense for Q2 2012 was RUR 549 million, up from RUR 256 million in Q2 2011. Our effective tax rate increased from 18.5% in Q2 2011 to 21.7% in Q2 2012, but remained in-line with Q1 2012. The effective rate of Q2 2011 benefited from the effect of the change in our treasury policy following the IPO and a reversal of an accrual for dividend withholding tax made in Q1 2011 of RUR 24 million. In recent years, Yandex’s principal Russian operating subsidiary had been paying dividends to its Netherlands parent company and incurred a 5% withholding tax in Russia when these dividends were paid. Under the new treasury policy, however, management does not currently expect this Russian operating subsidiary to pay dividends to the parent company out of 2011 or 2012 earnings. Therefore, no accrual for dividend withholding tax was required for Q2 2012.

Adjusted net income in Q2 2012 was RUR 2.1 billion ($63.0 million), a 64% increase from Q2 2011. Growth in adjusted net income exceeded revenue growth primarily as a result of decreases as a percentage of revenues in SG&A and product development costs.

Net income was RUR 2.0 billion ($60.4 million) in Q2 2012, up 76% compared with Q2 2011. The higher growth in net income compared with adjusted net income was primarily the result of SBC expenses representing a smaller portion of operating costs and expenses and a foreign exchange gain versus losses when comparing Q2 2012 to Q2 2011.

The total number of shares issued and outstanding as of June 30, 2012 was 326,429,234, including 177,989,385 Class A shares, 148,439,848 Class B shares, and one Priority share and excluding Class C shares outstanding solely as a result of conversion of Class B shares into Class A shares; all such Class C shares will be cancelled. There were also options outstanding to purchase up to an additional 11.9 million shares, at a weighted average exercise price of $4.24 per share, of which options to purchase 8.4 million shares were fully vested; and equity-settled share appreciation rights equal to 0.8 million shares, at a weighted average measurement price of $20.76, none of which were vested.

We confirm our revenue guidance for the full year and expect year-on-year ruble-based revenue growth of 40-45%.

A replay of the call will be available until August 7, 2012. To access the replay, please dial:

A live and archived webcast of this conference call will be available at http://investor.shareholder.com/media/Yandex/eventdetail.cfm?eventid=116371

This press release contains forward-looking statements that involve risks and uncertainties. These include statements regarding our anticipated revenues for full-year. Actual results may differ materially from the results predicted or implied by such statements, and our reported results should not be considered as an indication of future performance. The potential risks and uncertainties that could cause actual results to differ from the results predicted or implied by such statements include, among others, competitive pressures, changes in advertising patterns, changes in user preferences, changes in the legal and regulatory environment, technological developments, and our need to expend capital to accommodate the growth of the business, as well as those risks and uncertainties included under the captions “Risk Factors” and “Operating and Financial Review and Prospects” in our Annual Report on Form 20-F for the year ended December 31, 2011, which is on file with the Securities and Exchange Commission and is available on our investor relations website at http://company.yandex.com/investor_relations/sec_filing.xml and on the SEC website at www.sec.gov. Yandex undertakes no duty to update this information unless required by law.

These non-GAAP financial measures are used by management for evaluating financial performance as well as decision-making. Management believes that these metrics reflect the organic, core operating performance of the company, and therefore are useful to analysts and investors in providing supplemental information that helps them understand, model and forecast the evolution of our operating business. Below we describe why we make particular adjustments to certain US GAAP financial measures:

We believe that it may be useful for investors and analysts to review certain measures both in accordance with US GAAP and net of the effect of TAC, which we view as comparable to sales commissions but, unlike sales commissions, are not deducted from US GAAP revenues. By presenting revenue, adjusted EBITDA margin and adjusted net income margin net of TAC, we believe that investors and analysts are able to obtain a clearer picture of our business without the impact of the revenues we share with our partners.

SBC is a significant expense item, and an important part of our compensation and incentive programs. As it is a non-cash charge, however, and highly dependent on our share price at the time of equity award grants, we believe that it is useful for investors and analysts to see certain financial measures excluding the impact of these charges in order to obtain a clear picture of our operating performance.

We may incur expenses in connection with acquisitions that are not indicative of our recurring core operating performance. In particular, we are required under US GAAP to accrue as expense the contingent compensation that may be payable to certain employees in connection with our acquisition of the mobile software business of SPB Software in November 2011. The maximum aggregate amount of such contingent compensation is $14.1 million, payable on the achievement of certain milestones and the continued employment of the sellers, in two installments in November 2012 and 2013. Such maximum aggregate amount is being accrued substantially pro rata over the eight quarters of such period. We have eliminated this acquisition-related expense from adjusted EBITDA and adjusted net income to provide management and investors a tool for comparing on a period-to-period basis our operating performance in the ordinary course of operations.

Because we hold significant assets in currencies other than our Russian ruble operating currency, and because foreign exchange fluctuations are outside of our operational control, we believe that it is useful to present adjusted net income and related margin measures excluding these effects, in order to provide greater clarity regarding our operating performance. 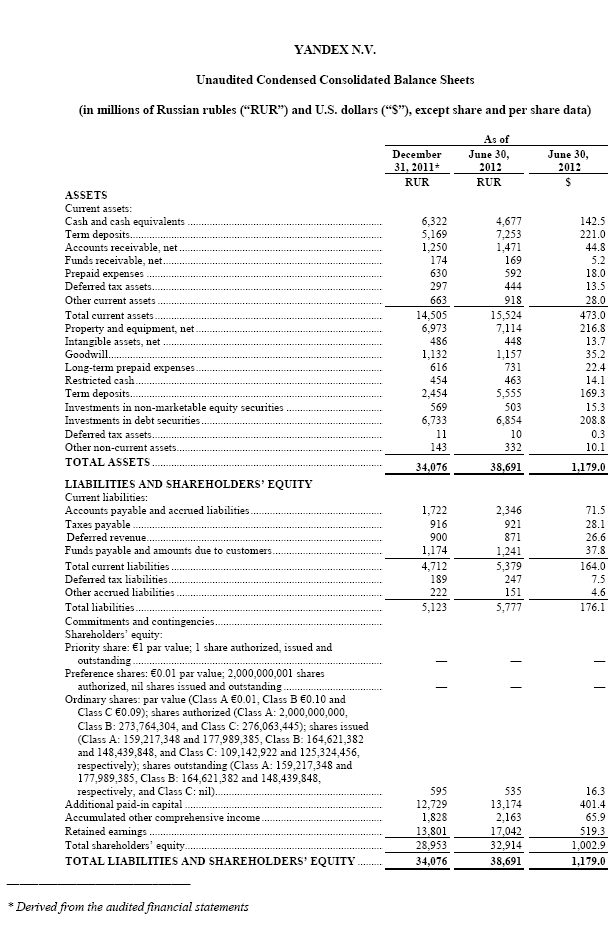 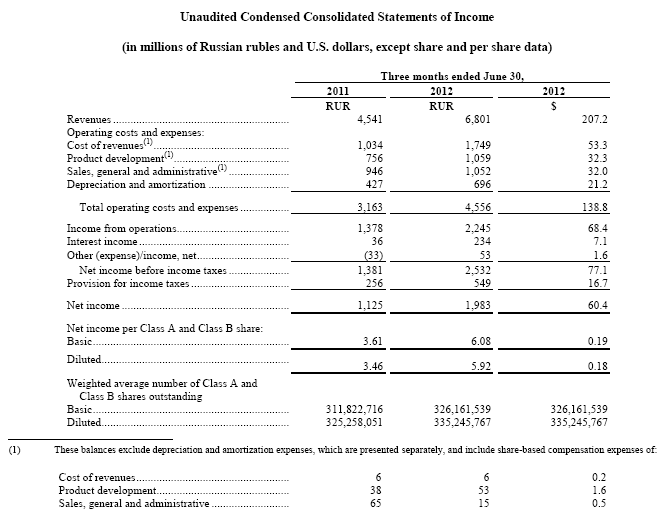 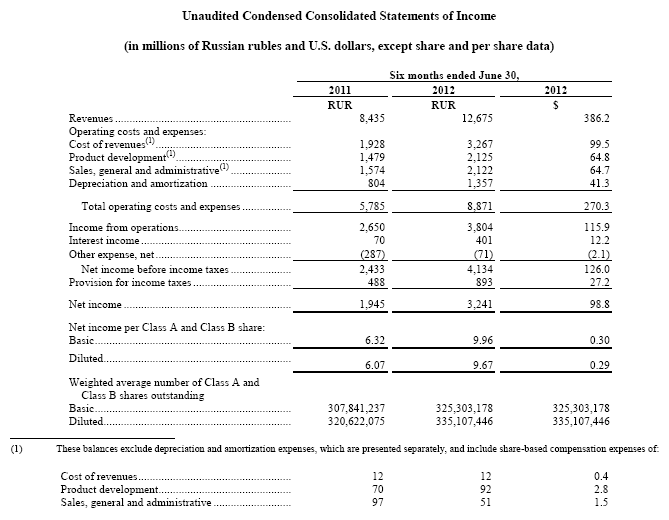 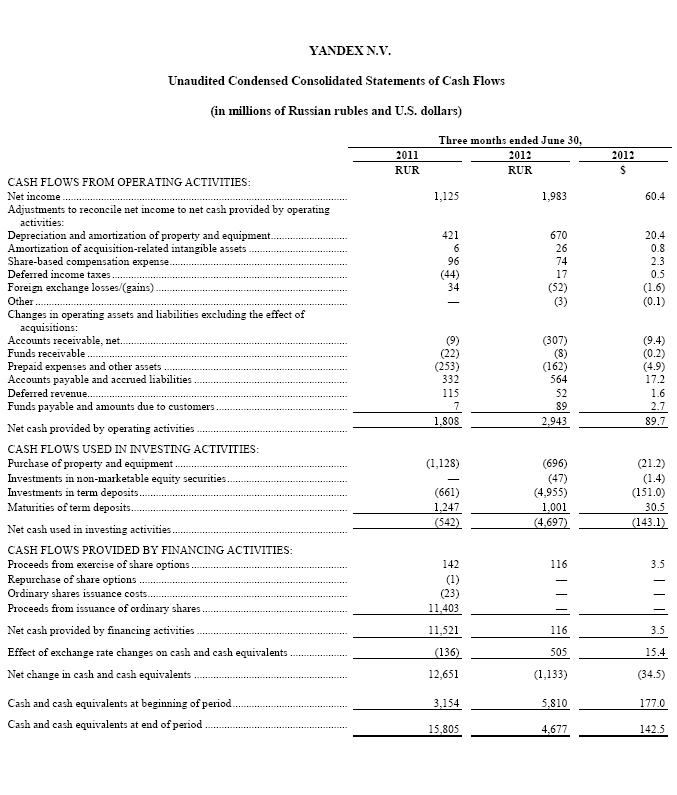 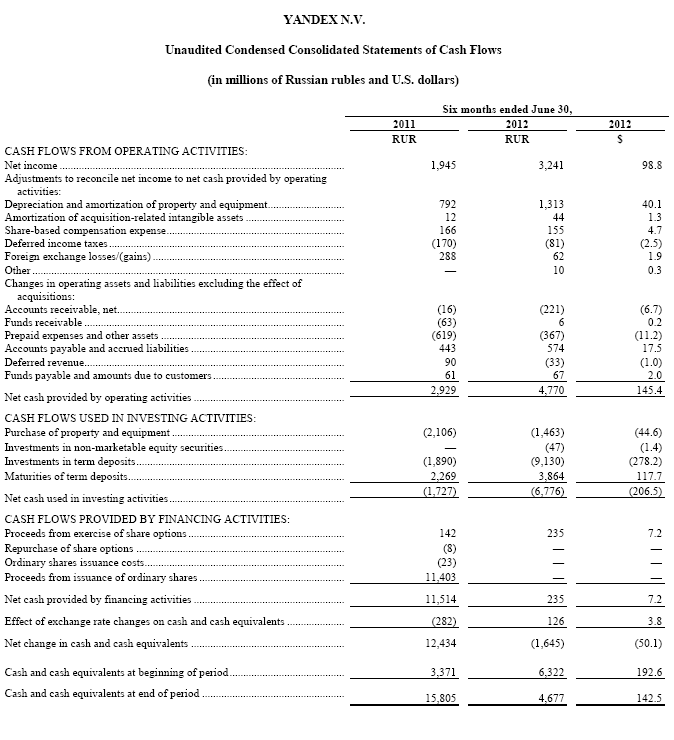 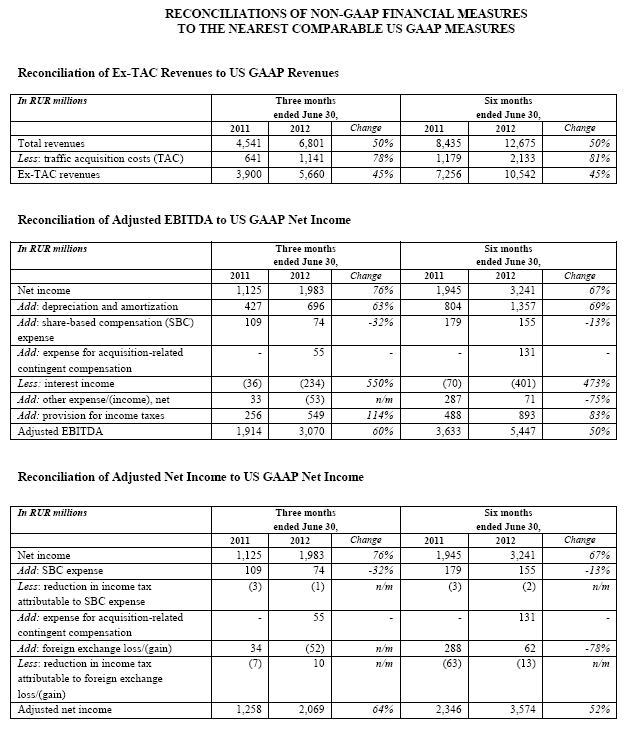 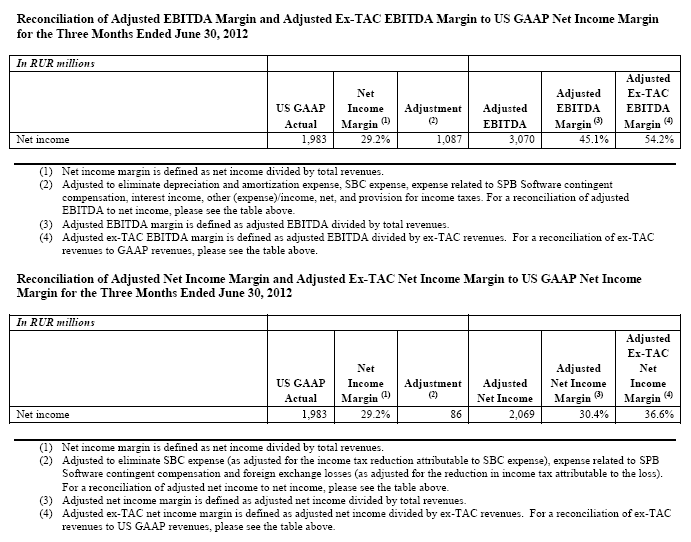